Not registered? Register as journalist or PRs.

Brexit shines a spotlight on the risks, but also opportunities, of European e-Commerce for Switzerland

Brexit shines a spotlight on the risks, but also opportunities, of European e-Commerce for Switzerland

Europe awoke last week to a shock referendum result, with UK citizens rejecting membership of the European Union (52% Leave; 48% Remain). Experts will argue about the exact causes of the of UK voters’ dissatisfaction, however the bottom line is indisputable: British voters felt that Europe does not do enough for them. Europe must rectify this situation as soon as possible. There is still much to do at a European level to reduce barriers to trade and investment and to bring widespread wealth to member states and partners.

A forthcoming report published by the NetComm Suisse e-Commerce Observatory entitled Unlocking the Potential of Swiss e-Commerce finds that online sales are increasing at an incredible rate, and set to reach 500bn€ in Europe this year (http://netcommsuisse.ch/Research/Global-B2C-E-commerce-Report-2015-Full-Version0.html). Of especial interest are cross-border purchases: there are currently 65 million Europeans who buy online from other EU countries, however, the potential EU market is around 685m people, a market which cannot be neglected. As more consumers move towards digital shopping and brands become more adept at creating omnichannel experiences, the time is perfect for e-Commerce to take off, but Europe must enact effective policies and demonstrate clear leadership to protect and empower this incredible market potential.

Some of Europe’s Policy challenges are structural, for instance, with most e-Commerce merchants finding it very difficult to recruit digitally-skilled staff*. Resolving this issue will take many years; however, in other areas there are no such excuses. Legal restrictions, customs delays and VAT/taxation complications are cited in the NetComm Suisse report as among the key barriers to doing effective cross-border business in Europe. Carlo Terreni, General Manager of NetComm Suisse, said, “It is incredible that these challenges still exist and in fact still hinder market growth in Europe in 2016. If the Brexit result has any positive effect on European cross-border business, we hope it is to lend new impetus to pan-European attempts to resolve these problems. NetComm Suisse, though the eCommerce Europe Association and other networks, is hard at work lobbying European legislatures to change, offering huge data-sets and expert discussions, reports and surveys to show the path forward, but the pace of change now really needs to pick up to avoid other EU countries becoming disillusioned with the project”.

There is a positive aspect to European challenges though; investors and firms seeking greater stability have an ideal place to call home in Switzerland. The Swiss reputation for a stable business environment, efficient taxation system and highly-skilled workforce is well-known, however over the course of the year the attractiveness of the Cantons is about to receive an incredible boost with newly-formulated tax legislation (the Swiss Corporate Tax Reform III) which creates a more level, yet still advantageous, playing field for firms operating in the country. This has particular relevance for companies and brands in the digital and e-Commerce area due to Switzerland’s growing appeal among worldwide consumers who value its archetypical efficiency, shipment security and trustworthy payment systems which, yet again, help to make the country an ideal place to those looking to cement and build their digital sales internationally. In a previous NetComm Suisse report, The Swiss e-Commerce Factor, 25% of respondents, representing millions of online shoppers worldwide were identified as “Swiss promoters”, actively seeking out and recommending brands who are “Made in Switzerland”. The reasons respondents gave for preferring Swiss goods, and which therefore make Switzerland be a more and more interesting HUB for international e-Commerce companies are:

With this Swiss appeal coupled with the country’s inherent stability in these turbulent times for the continent, there are still some great places to do business with Europe, even after Brexit.

For those in the world of business and e-Commerce, the Brexit result is both sad and troubling. Sad to see an old friend move a little bit further away (though it is hoped that deals can be struck to ensure business with the UK can continue relatively unhindered), and troubling in terms of what this means for the European project and cross-border commerce. Europe would be very wise to take this as a wake-up call in terms of cross-border ecommerce regulation. Just to highlight the importance of this market, our recent research found that the UK spends around 10bn$ on EU-based e-Commerce sites and the relationship is mutual, with all EU countries making a sizeable portion of their online spending in the UK (in Switzerland this was 7% of all purchases as at 2015*).

NetComm Suisse
NetComm Suisse is the first and only Swiss association of e-commerce, founded in 2012 with the aim to promote the services and support the interests of businesses working in the sector. NetComm Suisse contributes to the knowledge and diffusion of electronic commerce, its services and its technologies, creating initiatives aimed at consumers and operators. Among the objectives of the association is to bring down the barriers that limit the development of the sector, and to implement communication projects for the logistical supply and distribution chain, as well as to promote digital culture towards businesses and customers. The association also undertakes activities linked to regulation and lobbying, working with national and international institutions to create clear standards and frameworks; prerequisite for growth in the sector.

Contacts for the press: 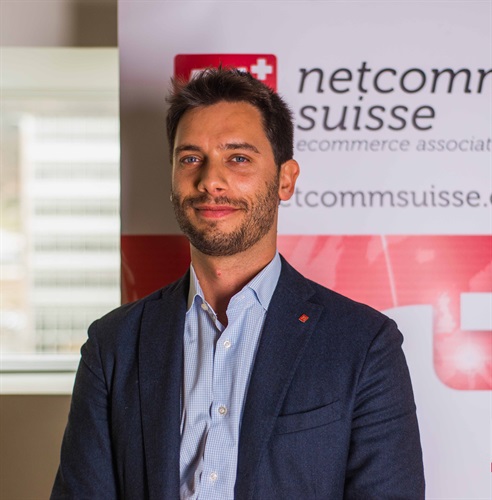